The following is an introduction to a series of high-risk cases from the Clinical Study conducted at Cork University Hospital in a Level I trauma center over a two-year period. The series will be featured over the coming weeks.

All patients who were implanted with Apex Tibial Nails, including both low-risk cases and the high-risk cases, were offered an opportunity to provide written informed consent to participate in an observational clinical study designed to quantitatively assess fracture healing using radiographic and patient-reported outcomes measures according to a previously published study protocol. See https://pubmed.ncbi.nlm.nih.gov/30477874/ and https://pubmed.ncbi.nlm.nih.gov/31274721/

All fractures were treated by reamed implantation of an Apex Tibial Nail in micromotion locking mode (see Figure 1) with two mediolateral proximal screws and at least two distal screws. Patients were advised to begin early mobilization and progressed quickly to full weight bearing unless clinically contraindicated (e.g. intra-articular fracture extension). Follow-ups were completed according to a set protocol for the observational study in which patients consented to participate, which included X-rays and clinical exams occurring at least at 6, 12, 18, and 24 weeks, or more if needed. In all cases, clinical union was achieved prior to the 24-week follow-up, but X-rays continued to 24 weeks as specified in the observational protocol. 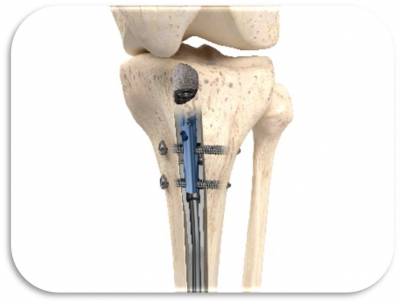 Patients were also scheduled for a low-dose CT scan at 12 weeks, which was used to assess the callus present according to a published methodology. This assessment included virtual torsional testing of 3D models reconstructed from the CT scans. Each fracture was also digitally reconstructed to allow virtual torsion testing of the intact limb.

Each model (fractured and intact) produced a measurement of structural integrity known as torsional rigidity. These torsional rigidities were then normalized to produce a ratio (fractured/ intact) that can be used as a summary indicator of healing progress.

This ratio, known as virtual torsional rigidity (VTR) score, takes a value of 0% if the fracture is completely unhealed (no callus bridging) and progresses to a value around 100% or higher as the fractured limb regains rigidity equivalent to the patient’s own intact anatomy.

Published data for low-risk tibial fractures indicates that they can be expected to achieve a normalized VTR value of around 100% by 12 weeks after injury. In all cases, radiographic union was defined as RUST score ≥ 10.